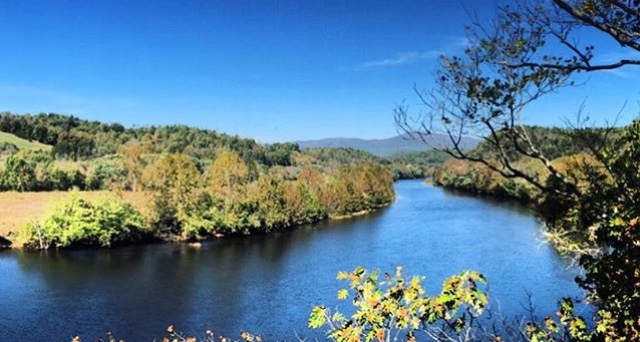 In October 2017, we drove a portion of the Blue Ridge Parkway in Virginia that we had never been on. When we came upon this sight, we just had to make a stop. We were mesmerized by the magnificent James River as it rolled through the Virginia Blue Ridge countryside. This river is full of history and has been a central part of the development of the region.

Young George Washington had a vision to use the river to transport goods and people long distances from the Virginia mountains to the east and thus surveyed and planned the Kanawha Canal. The canal was partially built, but due to financial constraints and the development of the railroad, was never completed. Eventually it succumbed to flooding, the remains were dismantled, and its path was used as a roadbed for a rail line.

Not only is the James River historical, it is beautiful and peaceful as it meanders from the Blue Ridge to the Tidewater region and on to the Chesapeake Bay. It is so tranquil, you almost forget your problems as you watch the water roll on by under the bridge.

“You will surely forget your trouble, recalling it only as waters gone by.” Job 11:16.

These words were spoken to Job, a man in the Bible who lost everything in spite of his faithfulness to God, by his “friend” Zophar. Although Zophar was not the most supportive of friends and was actually berating Job for an unfounded reason in this diatribe, truth is truth. And these words are full of truth and became Job’s future.

Eventually everything Job lost and even more was restored to him. He was able to look on his season of misery as waters gone by, as water under the bridge. Like Job’s, my problem is here today, but it’s rolling by. Soon, like the water in this river, this trouble will be history, gone, forgotten.

So what will I do during the season of trouble? I want to be like Job. That means instead of pulling away from God, I need to go towards Him and pour out my heart to Him. I must listen for His response, and then I must trust and worship Him. And soon, like they always do, my troubles will roll on down the river and be out of sight.